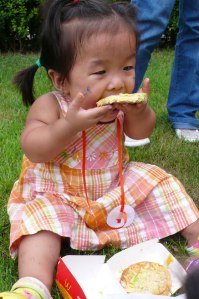 I couldn’t get this last pic on the last post… too many pictures, I suppose. Anyway. I thought it was funny and wanted to share. We had McDonald’s Hamburgers for lunch after the Olympics. (Does anyone else find this to be ironic? McDonald’s? After the Olympics? Hmmm… I know they feature Olympians in their commercials, but I seriously doubt they really eat there.)
This was a real treat, as they had to be picked up at the nearest McDonald’s (45 minutes away), and it isn’t that cheap to buy McDonald’s for everyone. The kids thought it was a novelty… they don’t like it as much as jiaozi (dumplings), but for those who go to the USA, I’m sure it will only be a matter of time until this is one of their favorite foods… hmmm… that’s kinda sad, actually.
Anyway, Julia made me laugh. She ate her hamburger — one. layer. at. a. time. And it was one of those hamburgers that has a bun in the middle. So, she ate the top bun. The meat. The middle bun. The next meat patty. And then the bottom bun.
Took a while, but she put it all away!

4 thoughts on “Meal of Champions”