I never really posted about our time in Dallas, when we had the opportunity to have an “off the blog” get-together. It was so much more than we could have hoped for! It was such an encouragement to us, and we had a lot of fun catching up with some very special people. 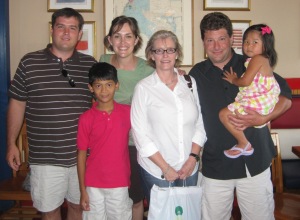 We were able to meet — for the first time — the family who adopted Sammy. Sammy definitely remembered us. He even had a photo album from his time in the orphanage, and there were two pictures in it of me. A local newspaper reporter must have given them to Sammy, as they were taken on the day we left. They aren’t happy pictures — Sammy and I were both crying in the pictures, and they were photographs taken at a moment when I felt more sad than I can describe. Though I hoped it would be different, I never really thought I’d see Sammy again. So to be standing in a restaurant in Dallas with my arm around a little boy who I never imagined I’d see again looking at pictures from the last time we were together… well, it left me speechless and in awe at God’s faithfulness.

We also got to see Leah and her family again! She was such a cutie. For those new to the blog, Leah is a graduate of our foster home. The first thing she asked Jacob was if she could go on another scooter ride! We were on the wrong continent for that, so that’ll have to wait for another time. 🙂

We totally thought maybe 5 people would come, but in the end there were closer to 40! It was such a surprise to us. In addition to the wonderful reunions I mentioned above, we were able to meet Julia’s new adoptive family (they’re still waiting to get her!), and see someone who was very instrumental in us having the courage to make this leap of faith and move to China! Past and future foster home volunteers came to visit, and there were lots of other friends as well. All in all, it was an amazing evening. I know I’m failing to remember people, but we loved all of you for coming. Thank you so much!

One of the people who came wrote about the evening on her blog. I think she said it much better than I could, because I was too busy talking and taking it all in!

2 thoughts on “Gathering in Dallas: A Recap”