It seems the whole country has caught a case of Swine Flu Fever. I don’t know anyone who is actually sick, mind you, but there’s something in the air.

Take this, for example. Every morning as we come to work, we must have our temperature taken and recorded before we can enter the main gate. 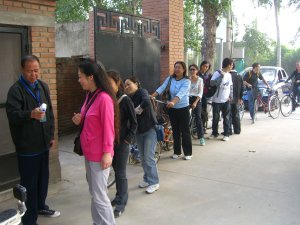 And if we happen to leave for lunch, the official policy is that we should have our temperature taken again when we return.
Seriously.
Because we might have caught the Swine Flue over our lunch break.
I pointed out the oddity of this requirement to one of the staff members involved in the planning meetings for “Our Official Response to H1N1,” and she said it is just a requirement to ensure they are being thorough. I still think it’s odd. After all, there aren’t that many people coming and going in the course of a day.
Though it isn’t a joke, the gate guards do tend to wave you through if they know they’ve already taken your temperature once that day.
One thing that I didn’t point out is that one can have the flu virus for several days and be contagious before one begins running a fever. This simple fact definitely impacts the effectiveness of a temperature check, but no one really wants to acknowledge that…
And then there’s the tea.
Tea, you ask? What could tea do in an effort to stop the spread of the dreaded plague, I mean virus?
Evidently a lot. The local educational governing board requires all schools in their district to give their staff and students 2 cups of herbal Chinese medicinal tea each day. There’s an English school at our organization, so we’re also required to drink it down. We take it for 7 days straight, and then supposedly we’ll be significantly less likely to catch the virus.
I have my doubts.
I think someone on the educational governing board owns shares in a certain tea company.
But, like all good followers, I’m “drinking the red kool-aid” — though only after checking to ensure the ingredients were benign. It’s a bitter/minty concoction of licorice root, honeysuckle flowers, mint, and one other root (forgotten it’s name) that gives it the bitter kick. According to popular belief, TCM’s (Traditional Chinese Medicine) efficacy is largely based on the medicine’s bitterness. More bitter = more effective. It’s a simple equation that makes swallowing the stuff incredibly hard.
In all seriousness, this isn’t really an overreaction or an exercise in futility. I think everyone knows we can’t really stop the spread of the Swine Flu. What it’s really about is that the government has said that there will be criminal penalties for any organization deemed “negligent” in ceasing to stop the spread of the flu. So, we’re keeping records of all the work that we’re doing to fight it, and we’re following all recommended procedures in an effort to ensure that if the dreaded flu makes it through our gates, our leaders won’t be arrested.
Because it is a distinct possibility.
So here we are — fighting off the flu with thermometers and tea. I hope it works! And, I hope you and yours stay healthy as well!
I’m happy to send you some tea, if you think it’d help.