So the baby bag has provided more amusing moments…

The beloved bag…
Oh how we’ll miss it when we go home to USA!
(It’s a friends; we’re just borrowing it.)

The other morning, we were in a driver’s car on the way to church.  We’d brought Cora in the bag, but when we pulled up in front of our friend’s house, I took her out of the bag to hold her so that there’d be more room for them to sit.  (I know – horrifying that we don’t use a car seat.  We would, but none of the drivers we know have seat belts in the back seat.  Seems better to hold her than to strap her into a seat that just becomes a projectile device in the event of an accident.) I asked Jacob to have the driver open the trunk so we could put the bag in.  The driver opened the trunk and turned to see what Jacob was getting from the backseat to put away.  When he saw Jacob pick up the zipped bag, a look of horror and shock spread across his face.

You could see him trying to conceal it a little bit… he already thinks we’re a bit ‘off’ for carrying Cora in a bag instead of in a 12-inch-thick (no kidding) bundle of blankets.  (Have any of you seen the documentary Babies?  If not, you need to.  You know the Mongolian baby, and the way they bundle him up in preparation for the trip home from the hospital?  Well the Mongolians and Chinese share similar baby-bundling traditions.)  But back to the driver.  Though he, along with most others here, think the bag is strange and that foreigners have crazy child-rearing ideas, he usually lets it go.  But he would have none of this.

“Where’s your baby?” He asked, in a semi-horrified voice.  I was sitting directly behind him so he didn’t have a clear view of me holding Cora. Unfortunately for us, he didn’t seem too surprised to see Jacob putting the bag in the trunk… a sort of “I-really-wish-they-wouldn’t-do-this, but-I’m-not-surprised-that-they-do” kind of response.

We felt more than a little vindicated when we could point out that I was in fact holding our baby.  And not putting her in the trunk.  And then we all got a good laugh.  Turns out we aren’t totally crazy foreigners. 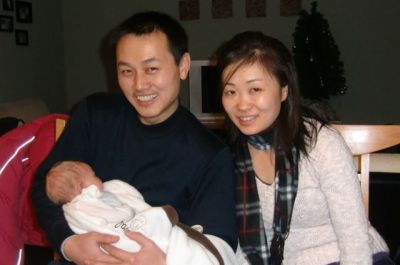 And then there was the other day at the office.  Yet again we took a sleeping Cora in her bag on the cold walk up to the office.  (We’d probably carry her more, but it’s just so darn toasty in that bag, and Beijing winters are COLD!)  Jacob set her down on my old desk, but since she was soundly asleep and not stirring, the bag just looked very bag-like.  One of my co-workers, Kevin, turned to say hello to Jacob and me and asked, “Where’s Cora?”

Realizing he hadn’t yet encountered The Bag, I didn’t miss a beat and said, “Oh, we left her at home.”

“You what?” Kevin asked, with a look of incredulity.

Kevin’s eyes widened, as you could see him trying to decide just what to say in response.  Unable to keep a straight face any longer, I started laughing and told Kevin I was just kidding and that she was in the bag.

“Well, I saw the bag, but I never dreamed you’d put your baby in it!”

It is more reasonable that we’d leave her home, I suppose.  That’s how we do things in America.