So first of all, WAY TO GO EVERYONE!  The second matching grant fundraiser challenge was met.  Which means so far in the last couple of months, $14,000 was raised for the NDFH medical/surgical fund.  I’d love to see this momentum keep going.

This last week, Cora and I had the chance to go to St. Louis, MO and a little town in Illinois to visit some dear friends from China.

On the trip, Cora had a great time meeting lots of new animals. Seriously, I don’t know where this child gets it, but she LOVES dogs in particular. At Amber’s grandparents house, she fell for this giant, sweet dog named Jack. But let’s just say he didn’t share the infatuation. She seemed to terrify him, and he’d back across the room if she scooted towards him. And then at Deanie’s house, she loved watching the dog and cat “fight.” I caught it on video; unfortunately, it is pretty dark.

But even though the video is dark, there’s other examples of Cora’s animal love. Maybe a she has a future as a Vet? I know her auntie Jane would love that… 🙂

Cora and the very wary Jack.

Beyond playing with animals, we did a lot of eating.  Cora tried many new foods, and loved just about all of them.  So did I.  She ate teething biscuits, blueberry baby crackers, a dreamsicle popsicle, and just about anything we could come up with to put in her little teether pouch.  In fact, my friends teased us and said we often looked just alike at mealtime.  I see their point.

So our visit was so wonderful. We met our friend Amber, who worked with us in China, and her sister Kayla in St. Louis and then drove to IL where we met Deannie and Joy. Deannie was an English teacher at New Day in China, and Joy used to be on staff in China. But now she’s going to college in the USA. It isn’t easy being an international student, but Joy is doing a great job… she made all A’s her first semester! You may remember hearing Joy’s story… it is quite inspiring! And, she still needs help with her schooling, if anyone feels particularly burdened by that need. Just drop me an email and I can put you in contact with her.

While we were there, Amber took pictures of Cora. I posted many of them in a facebook album, but you can get a sneak peak here. Click on the pictures below to see the others!

I must say, having a professional photographer as a friend is a big perk in life.  🙂

And when we got home, Cora learned a new trick. 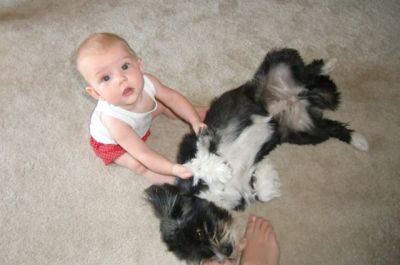 That’s right, friends.  She is now sitting up.  She did it for the first time yesterday afternoon and has been acting like an old pro ever since.

And for those who need still more Cora photos; namely the grandparents and other family, I also posted an album of pictures from Cora’s sixth month on facebook.  Just click here to check it out!